A very interesting debate took place over the weekend on the Twitter account of a popular edtech ambassador based in the United States named Alice Keeler (@alicekeeler). The tweet addressed to Alice which kicked off the debate was an innocent enough question on the surface, asking Alice for her recommendations for a PDF annotation tool which they could use in class with students. To which Alice responded:

I might vomit a little in my mouth. Please please please do not have Ss annotate PDF’s. That is a terrible lesson https://t.co/A7l6xrNVor

So what was it that got Alice quite irate at this question? Well it all comes down to the misuse of technology for education. Essentially what this teacher was intending to do with the technology that had been bought for her institution, which must have been at a sizeable cost in order to setup a 1:1 tablet classroom, was to substitute what she was already doing with worksheets and simply put those worksheets online for the students to write over, essentially substituting ink for swipes of a finger over a mobile screen. And how do we know this new way of working for the students will not transform their learning experience for the better? Well for that we have to refer to the SAMR Model.

What is the SAMR model?

The SAMR model was developed by Dr Ruben Puentedura as a way to help educators bring technology into learning and teaching for the betterment of the end user learning experience. 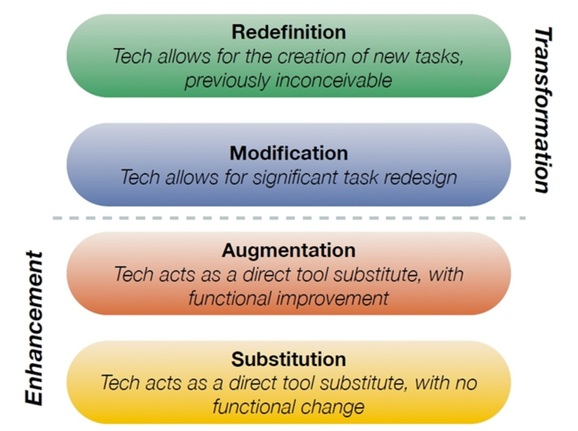 The goal of this model is to keep educators, and indeed learning technologists, considering how the design and development of educational experiences that utilise technology should be sitting at the top half of this model where the maximum benefit to the learner is achieved.

But why is substitution such a bad thing? Well in this particular case the educator was not using tech as well as she ultimately could, this would have left her with large amounts of time being lost on marking that could be automated, personalised coaching time for each learner in the class lost due to the fact that her session provided no instant feedback based on the learners actions to the task of writing over the PDF, and as we mentioned earlier – the technology would be under utilised, which is a travesty when there are so many free, engaging and easy to use mobile applications or web based tools that could transform said worksheets into fully rounded learning exercises. Some examples of those tools are coming up in just a sec.

Why doesn’t the SAMR model work as a ladder?

Educators taking learning technology on board to sink back into old habits is certainly nothing new to me. My time spent consulting in the work based learning sector introduced me to many characters who either feared, loathed or simply did not understand the technology. But to their credit with the right coaching and information delivered at a pace and style which suited them, many of those educators really took to technology like iPads, and tried apps and social media for the first time which they never would have done in the past, and the majority of educators once they see the benefits really do run with it. I mean who doesn’t want to be given a tool which makes their job easier once you understand how it can be achieved!

But here’s where the biggest debate took place at the weekend, the camp that think the SAMR model should be a ladder, meaning that educators should be made to work from the bottom up with technology VS. the camp who believe the model presents a barrier which should not be crossed, and educators should always aim high first time. Me, I sit within the latter camp and I’d like to explain why.

Personally I believe if the time is spent to professionally coach educators that are new to learning technology to simply do what they are already doing but marginally different, then that time has been lost. Because ultimately it is much harder to break old habits when you are re-enforcing them, and the educator is going to spend less time thinking of new and transformation ways of teaching once you have demonstrated how you can achieve what they are doing now but quicker.

I want to live in a world where cutting edge technology really thrives in education. I am so excited by upcoming virtual reality products coming in 2016 and the immersive learning experiences that they will bring. Game based learning which is bridging the gap to effective learning for learners with special needs (http://www.bbc.co.uk/newsround/33916933). And augmented reality which changes our understanding of the world we are looking at. But to achieve these goals becomes a major challenge when the educators I need to deliver these experiences are still getting their learners to write on PDFs.

So these are my thoughts and I’m sure I’ll get all kinds of comments on this. So to finish up, here are some of those online resources I mentioned earlier:

Skills Workshop (http://www.skillsworkshop.org) – Free lesson resources covering Literacy, Numeracy and IT at entry level. A good Starting Point for developing lesson plans.
Quia (http://www.quia.com)- Transform those exercises into something automated and abit more engaging and fun. There are also a number of ready-to-go, self grading textbook and workbooks. Easy to get started with.
Padlet (http://www.padlet.com) – Just launched an iPad app, so is perfect for 1:1 tablet classroom. So easy to use! Collaboration and team working straight out of the box.

Chris Hodgson is an award-winning Digital learning Solutions Developer and Director of Discover eLearning Ltd. He supports SMEs and large firms through the process of integrating eLearning into their organisation. Chris has over 10 years experience working in Higher Education, Independent Training Provider Sector and Charity Sector learning and development.

This site uses Akismet to reduce spam. Learn how your comment data is processed.

@LearnDashLMS Hi. I sent an email to Support on Thursday regarding a Learner Profile issue which so far I haven't received confirmation or response to. Can you let me know what the status of this ticket is please? CH

RT @gravityforms A Guide to Gravity Forms 2.5: Everything You Need to Know! Find out more about Gravity Forms 2.5 to help you get the most out of our latest update… gravityfor.ms/3eRvZi… #WordPress #GravityForms

This site uses cookies to improve your experience. Find out more.